GARETH SOUTHGATE IN LINE FOR AN OBE

England head coach Gareth Southgate is in line for an OBE after leading the country to the World Cup semi-final earlier in the year in Russia, it has been reported. 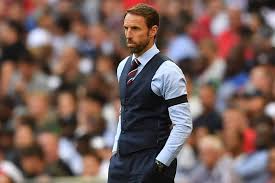 Southgate won the hearts of numerous England fans as the Three Lions recorded their best performance in the World Cup in over 28 years. According to reports, the manager could well be rewarded with an OBE or a CBE for his achievements, as it is too early for knighthood.

According to The Sun, he has been informed of the award but cannot also speak about it publicly until an official announcement has been made.

A source read, “Gareth is definitely up for an honor, most likely an OBE or CBE, as it is perhaps too early for a knighthood”.

“He is on the list, very few people know about it yet”.
Southgate has been tipped by bookmakers to receive the OBE, especially Coral as the firm’s John Hill said the manger had helped the nation fall back in love the country’s national football team again.

The two previous head coaches to have led England to the semi-finals in the past both received honors and knighthoods.

Alf Ramsey, who was the manager that guided England to World Cup glory on home soil in 1966, was knighted a year later in 1967.

Two of the best players of the triumphant England 1966 squad, Geoff Hurst and Bobby Charlton, were also honored with knighthoods in the 1990s.

“Manager Bobby Robson was another manager who received a CBE in 1991“, a year after England reached the semifinals of the “World Cup in Italy“, and was knighted for his services to England football in 2002.

Southgate similarly led his England squad to the last four of the 2018 FIFA World Cup and could well be awarded a CBE just as Bobby Robson in 2002.